It seems that everyone knows how to play tag, but just in case it wasn’t in your childhood game playing repertoire, here is how you play. A group of kids decides who will start out as being “it.” That person chases the other people around, trying to tag one of them with their hand. The newly tagged person is now “it.” There is often the rule of “no tag-backs” where you can’t tag the person who just tagged you. The game ends when everyone is tired of playing.
Number of Players: Any size group.
Equipment: None.

This is a variation of Tag where if the person who is “it” tags you, you have to freeze where you are. Another participant can tag you to unfreeze you.
Number of Players: A small group.
Equipment: None 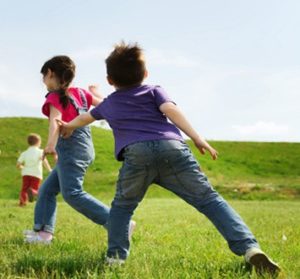 This outdoor game is a lot of fun. Every player gets a number and crowds around the person who is “it” for that round. “It” then tosses the ball straight up and the other players run away. As the ball reaches the top of its toss, “it” calls out the number of one of the other players and then runs away also. The player whose number was called must run back and catch the ball (or chase after it if it is bouncing around). Once that person has the ball, they yell, “Spud!” Then everyone else must freeze. The person with the ball must try to hit one of the players with the ball. If they do, that new person gets a letter (first S, then P, then U, then D) and is now “it.” If they miss, the person who threw the ball is “it” for the next round.
Number of Players: A small group.
Equipment: Playground ball.

This ball game is played on a square court further divided into four smaller squares, numbered one through four. One player stands in each of the squares, with the highest ranked player in number one, lowest in number four. You bounce the ball among the players, bouncing once in the other person’s square before that person catches it. When I played this as a kid, we had countless additional rules to choose from. The person in square one got to choose the rules. Anyone who violates the rules will have to move down in the ranking, or be eliminated with another player rotating in to square four.
Number of Players: Four, unless you take turns.
Equipment: A four square court or sidewalk chalk, a playground ball. 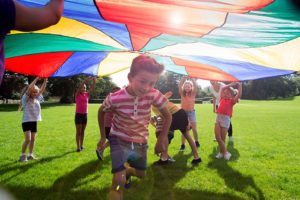 Use some sidewalk chalk and make a hopscotch grid. Number the squares from one to nine. Pick a rock that is good for tossing. Small ones can bounce too much, and larger ones are hard to throw. Start by tossing the rock onto Square 1. Hop over the rock and hop with a single foot or both feet (to follow the hopscotch pattern) all the way to the end. Turn around and come back, stopping on Square 2. Balancing on one foot, pick up the rock in Square 1 and hop over Square 1 to the start. Continue this pattern with Square 2. And so on. If you toss your rock and miss the correct square, your turn is over. This game can be played with any number of people, but only one person can go at a time. If it’s raining or dark or too cold, you can get indoor hopscotch mats or foam pieces, or just find a pattern on the floor to follow, perhaps using a beanbag instead of a rock.
Number of Players: One at a time.
Equipment: Hopscotch grid, rock or beanbag. 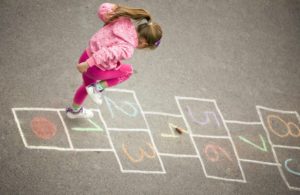 This game requires three people, or just one or two people with really good chairs. It is easily done inside, assuming a sturdy floor. This game resembles regular jump rope in that you jump. A lot. But you jump in a pattern. Two people (or chairs) put their feet inside the rope and stretch them out, standing far enough apart for the third person to jump between them. The third person, or jumper, faces one of the people holding the rope and jumps in a pattern of left, right, inside, outside and on the ropes. What pattern you use is up to you, but all the players should use the same one. The game is started with the rope around the ankles. Once the jumper does the jump correctly, the rope is moved up to the calves. Then to the knees, then the thighs. Usually it doesn’t get any farther than that. Once you miss, it is someone else’s turn.
Number of Players: Preferably three, but it can be done with one or two.
Equipment: A stretchy-type rope or 5 to 6 meters of rubber bands tied together in a circle. 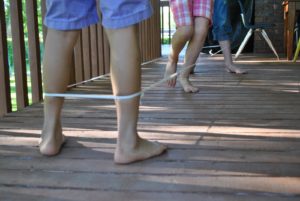 The general rules specify that you draw a circle in the sand or on the sidewalk, and then take turns trying to knock each other’s marbles out of the circle with your one large marble. As with the other games, there are countless variations. I loved Marbles – can’t say I ever played them I just loved having them & looking at them lol.  You can also use a marble mat which contains different point zones.
Number of Players: At least two.
Equipment: Chalk, large and small marbles. 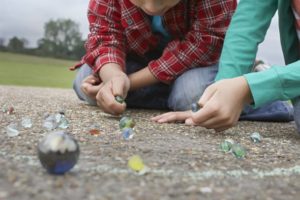 This game can be played anywhere, even in a car or other small space. One person is Simon and starts by saying, “Simon says, ‘[insert action here]’. ” Everyone must then do the action. However, if Simon makes an action request without saying, “Simon says” to begin the request, anyone who does that action is out. The last person still playing in the end will be Simon for the next round.
Number of Players: A small group.
Equipment: None.

This variation of tag is played in a swimming pool. Whoever is “it” closes their eyes and yells “Marco!” The other players then yell “Polo!” The “it” person has to tag one of the others, and then that person is “it.” Be sure to play in a pool that is not too deep for any of the players.
Number of Players: A small group.
Equipment: A swimming pool. 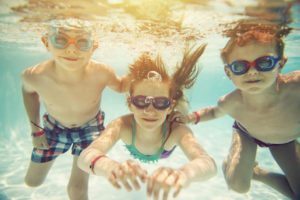 Divide everyone into two teams, each forming a long line, holding hands, facing the other team. The two teams should be around 20 or so feet apart. The teams take turn calling out, “Red Rover, Red Rover, let <insert child’s name> come over!” That child leaves their team’s line, runs as fast as they can toward the other line and tries to break through the held hands. If they break through, they get to take someone back to their team. If they don’t, they join the new team. When a team only has one person left, that person tries to break through the other team. If they do not, then their team loses. If they do, they gain a player and play continues.
Number of Players: Any decent size group.
Equipment: None. 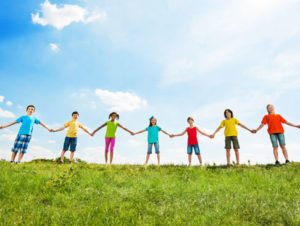 Heads Up, Seven Up

Dating back to at least the 1950s, this game is one we played in elementary school. In my experience, it was usually done in the classroom with everyone at their desk. To start the game, seven players go to the front and the teacher says, “Heads down, thumbs up!” Everyone still at their desk puts their head down, extends an arm and stucks their thumb up. The seven kids that were at the front go around and each press one person’s thumb down. Then they all go back to the front of the room and the teacher says, “Heads up, seven up!” The players at the desks raise their heads and the seven whose thumbs were pressed down stand up. Each in turn names the person they think pressed down their thumb. If they are correct, they change places with the presser. Then the game can start again.
Number of Players: Minimum of 14.
Equipment: Desks at which to sit.

This game is one in which most people end up laughing quite a bit, so if you’re in the mood for silliness, give it a go. Players sit in a circle. One person thinks up a sentence or phrase and whispers it to the next person. That person repeats it to the person on their other side. This continues around the circle. When it finally reaches the last person, that person says the sentence out loud. Hilarity ensues. The ending sentence is usually quite changed from the beginning sentence, since errors tend to compound as they go around the circle.
Number of Players: A small group.
Equipment: None. 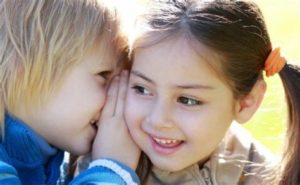 Email us at BackyardFunZone@gmail.com for our current price Sheets & Links to online Catalogs.